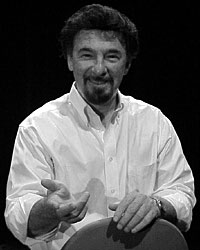 In addition to his teaching and research duties at the university, Dr. Fischoff is an award-winning screenwriter and a consultant on psychological issues to both the film and television industries.

He has written numerous articles and book chapters in the areas of social, clinical, and media psychology and has appeared on numerous radio and televisions shows worldwide. He regularly writes reviews of books and films for the American Psychological Association journal and for popular magazines.

So how did you get involved in psychology in the first place? Was there a moment in your life when you knew that was what you wanted to do, or did it just sort of happen?

I was screwed up as a kid, and I was looking to find out whether I was the problem or part of the problem. I was asking myself how I deal with this dysfunctional human condition, which led me to take psychology as an undergraduate.

I got into social psychology after starting in clinical psychology. When I got my Master’s degree, I did a clinical internship because it was something to fall back on in case I couldn’t get a career in teaching or acting, which was something I wanted, but later thought better of pursuing.

Once I started teaching psychology, wherever I taught, I got involved in theater or film clubs. After I got fired from a position at Clarkson University because of my anti-war activities during Vietnam, I moved to Hollywood, and once you move there, that’s it.

Essentially I was interested in the effects of mass media, and how they impacted society and cultures, and it’s a lonely business being a clinical psychologist, so I got into teaching. I had done stage work before and I always thought my students were my audience.

The position satisfied not only my sense of exhibitionism, but also my intellectual curiosity because I was able to do a lot of research. It was the best decision I ever made in my entire life. You have to take a vow of poverty, but it gave me prestige, independence, and lots of free time.  It just worked for me.

After earning your undergraduate degree, what made you decide to go back to graduate school and earn the other degrees?

Before I went to graduate school I went into marketing research in New York City, which is where I am from. I was interested in advertising, so I got a job there. Then I got a notice from the draft board that they wanted me to visit Hanoi and I said, ‘oh god, I don’t want to go to Vietnam!’

So I learned that I could get a deferment if I was studying a critical occupation, so I jumped into graduate school and I loved the whole intellectual lifestyle, so I just stayed.

What is media psychology? How would you describe the field to someone who doesn’t understand it?

It’s really a study of the effects of media on individuals groups and cultures. It encompasses all aspects of identity, such as how is my demographic group portrayed, and how popular culture is disseminated.

As a media psychologist, you are either part of the phenomenon of being on or in the media or you are doing research or you are teaching it. The overriding issue is to cultivate media literacy. We are living in a highly media-concentrated environment and you need to know what effect it is having on you and how it is changing the way human beings exist, coexist and interact.

With so many mediums out there, I imagine it can be difficult to keep pace in such a rapidly changing environment. How difficult is it for you to balance all of the different types of media?

There are just so many things to keep up with, so you say, okay, I can’t learn everything. I can’t cover it all because it is just too much and my brain is aging. You feel that sense of helplessness that maybe at a certain point you will become incapable of communicating with people because you're ignorant of the latest technologies.  But, you keep on trucking and try to be as savvy as you can without your brain shouting "STOP IT.”  I don't text people and I don't have a smart phone; just a net book and a basic cell phone.

We are dealing with a culture that is so rapidly changing that it ends up producing fissures between generations. For example, one of the shows I appeared on was The Montel Williams Show.  The episode had to do with gangster rap and I was asked to discuss its effect. Well, a private investigator for a lawyer who was representing a client in a murder case saw me on the show and asked me to be an expert witness. The client was a young black teenager and his ex-girlfriend was killed.

He had written and performed gangster rap at parties and the prosecution wanted to use rap lyrics as evidence of a state of mind. I got involved and started reading and listening to gangster rap. Going into the pre-trial and saying that these lyrics are more inflammatory than prejudicial wouldn’t be enough, so I had to do research on how people react to reading rap lyrics and hearing that this guy was a rapper, and also how they would then judge him based upon that media. On the basis of that, 90 percent of the lyrics were excluded. The thing is..... I hate gangster rap lyrics, so it was a huge burden for me to listen to this crap!

Now you have done some work in television and film that from the vast majority of peoples perspectives doesn't have a lot to do with psychology? How and why did you get involved in that?

The first script I ever wrote, I co-wrote with a woman I was dating at the time. It was bought and turned into a television movie by CBS. I remember I had the opportunity to watch the premiere of "Miles To Go...", and I drove onto the lot of 20th Century Fox in a convertible with a blonde sitting next to me. It was one of the highlights of my life.

Working in television appealed to my sense of celebrity, made me feel like I was cut from the herd of mediocrity. It’s funny because whether it is an actor, a media member, or a senator, everyone likes to be seen on television. It’s like how a plant turns to the sun. They want to do it, and then pooh-pooh it as though it is beneath them. Not every media psychologist wants to be on television, but I really liked it.

So what does a typical day look like for you now?

Well, I edit the Journal of Media Psychology, which was the first journal in the field when my wife and I started it, and that is still going on, and I have my blog, and I do consulting work.

Talk a little about the importance of writing for a psychologist in any field? How did you improve your writing skills to the point where they are now?

When I was an undergraduate student, I had a friend who was a grad student and he would take my papers and just crushed me with hurtful but very constructive criticism, which actually helped. Also, I did a clinical internship, and it required three or four papers per week.

Those really shaped my writing skills and took me from a pompous ass to somebody who sees writing as an art form. The thing about writing is the more you write the better you write. Words came naturally to me, but writing didn’t.  Oh, yeah, I also married a writer who proofs most of what I have published.

What advice do you have for students interested in pursuing a career in your field?

Well, times change and there were more opportunities  to go into this line of work when I was looking for work rather than now because of the sheer number of people with PHD’s and the economy’s problems. When I went to graduate school, I majored in personality and social psychology and minored in clinical psychology. I figured I could always fall back and go into private practice, which is why students should be prepared to have several different outlets for their talents or education.

Don’t put all your eggs in one basket. If you find several work areas that interest you, then you are better off and more likely to work your way into a successful career. I always encourage teaching as a way to go because it gives you the time and support to conduct research. Teaching will give you access to the institutions of learning, and it is through that that you begin to develop a name. I don’t care if you are at university or a private practice, you need to publish or you will perish.

If you don’t have a name, you won’t have the opportunities and growth. You need to write stuff. Submit articles; write letters to the editors, because you are working through the media as a media psychologist. You need to learn how to speak to the populace. You can’t talk to an interviewer like you would talk to a colleague, so you need to be well-versed and talk in more common parlance and be current on what is happening in your culture, at all levels of media penetration.  The more you know the more people will be interested in what you have to say.  And the more articulate and unjargonized are your explanations and observations, the more the media will seek you out for comments.

For more information about what exactly a media psychologist does and how to become one, please feel free to visit our Media Psychology careers page in the careers section of our website.