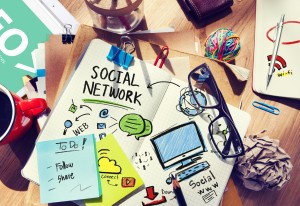 What Is Media Psychology?

Today,  media is one of the biggest and most influential parts of our lives. In many ways, we are bombarded with it wherever we turn - on television, on the internet, on the radio, in magazines and newspapers, and even on our cell phones. Media outlets often influence what we wear, what we watch, how we eat, what we read, who we hang out with, what we perceive as cool, and even how we think and feel.

Media psychology is branch of psychology that focuses on the relationships between media and human behavior. This applies to individuals and society as a whole. Basically, professionals in this field study how people interact with media and each other due to media influence. This field of study can be used to determine how the media affects us and how we perceive certain elements of the media. It can also be used to determine what can be changed in  media to give us a more pleasant or appropriate experience.

The history of media psychology actually began back in the 1950's, when television was becoming popular. However, psychologists were more focused on children and television viewing at the time. Research began to be conducted to determine how television viewing affected a child's reading skills. Later, researchers also began to study if children watching violent television were more likely to imitate violence or exhibit anti-social behavior.

In 1987, Division 46 - the Media Psychology Division - of the American Psychological Association was created. This field became even more popular following the heartbreaking and frightening weeks after terrorists took down the Twin Towers during the September 11th attacks in 2001. Due to the violent nature of the attacks and the rising death tolls, people around the world were glued to their television sets in the days that followed. Media psychologists, on the other hand, took this as an opportunity to study violence in the media and how it affected people.

Today, however, the field of digital media is growing at an exponential rate, and the field of media psychology is growing right along with it. Media psychologists are now not only concerned with television and its effects, but also all of the new media forms that have cropped up in recent years, such as the internet and cellular phone technology.

Why Do We Need Media Psychology?

We are a media-centric society today, many of us thrive on and need media in our live in one form or another. No matter how much some people hate to admit it, the media really does affect all of us, in some way or another. In fact, it would be unusual if we weren't affected by the media, considering we're surrounded by it most of the time.

Today's society is spending more time in front of televisions and surfing the internet, partly because of the increased availability of these types of technology. Something that prominent is bound to affect us. Media psychology is necessary for more than a few different reasons. First of all, it helps people adjust to the rapidly growing technological world. It can also help us wrap our heads around the fact that all of this technology does affect us, and it's not always the harmless information tool we tend to think it is.

What Are the Education Requirements to Become a Media Psychologist?

In general, media psychology is a mixture of psychology and media technology. Individuals interested in careers in this field should make sure that their education encompasses both of these areas.

Although there graduates with four year bachelor degrees might be able to find employment in entry level positions, most truly successful media psychologists go on to earn their graduate degrees, such as master's and doctorate degrees.

What Does a Media Psychologist Do?

The majority of media psychologists are researchers. They might observe individuals and interview them about their reactions to certain types of media. Media psychologists' research might be conducted in any number of areas. For example, they might study how people perceive certain types of media, or why some people are more affected by media than others. The results of this research can then be compiled into reports, either for information purposes or practical purposes.

After conducting original research or studying past research, media psychologist can then apply their findings to real world situations. For instance, they may be called upon to figure out why some people are more likely to watch certain television shows. They can then offer practical solutions to increase viewers of these shows. They may also be called upon to help devise a plan to make certain types of media more pleasant and user friendly.

Media psychologists might also act as marketing consultants as well. Professionals in this line of work are usually responsible for trying to figure out how to make people more responsive to advertisements in the media. This can be accomplished any number of ways, from completely revamping an advertisement to more subtle changes, like different background music or colors.

Certain types of media can also be used as educational tools as well, and media psychologists might be asked to make these tools more effective. Two excellent examples of this are educational children's shows and instructional DVD's.

A few media psychologists might also work in the healthcare industry. They can help create therapeutic and self-help media materials.

Where Does a Media Psychologist Work?

Media psychologists can often find employment in areas where media is prevalent. In today's society, that's just about everywhere.

One of the most common places that media psychologists can be found is in broadcasting companies, such as television, radio, and movie studios. They might also be able to find employment in marketing and advertising firms as well.

The education sector also has a need for media psychologists. They may work with schools and universities, for example, helping to create effective educational materials, such as DVD's and interactive software. Physicians and hospitals might also call upon media psychologists to help create effective self-help and interactive therapeutic media materials. This can include such things as smoking cessation aids and weight loss instruction videos.

What Is the Median Salary of a Media Psychologist?

According to the Bureau of Labor Statistics, media psychologists (categorized by the BLS as psychologists, all other) earned a median salary of $101,790 as of May 2019.