What Is Geriatric Psychology? 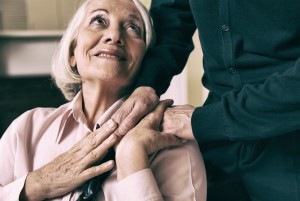 Like death and taxes, aging is another inevitable part of life. Every person who is born ages to some extent, whether they age for seven seconds or seventy years. The majority of people, however, often live until ripe old ages. In many ways, this can be a blessing as well as a curse. For instance, they often grow old enough to pursue careers, raise children, and enjoy the company of their grandchildren. Unfortunately, old age comes with its own unique set of problems. It is in this stage of life that a person's body starts to wind down for its final rest. Many of the physical problems toward the end of a person's life combined with family and social issues can have an effect on a person's mind as well.

Geriatric psychology is an important branch of psychology that focuses on the mental, emotional, and physical problems faced by elderly individuals. This often includes studying and researching different problems that might occur as a person begins nearing the end of their life in old age.

For instance, the number of physical problems that a person faces at this time can be very upsetting. Even older people that are considered to be generally healthy typically notice that they aren't able to do the things that they used to do. Also, many people begin to watch their friends and spouses pass away, which can often lead to grief and depression.

At one point in time, it was only the physical problems of old age that were addressed for the most part. The problems that elderly people faced mentally and emotionally weren't necessarily dismissed, but they weren't always addressed. Elderly people were often just treated and kept physically comfortable until their time was up. During the 20th century, it was Dr. Marjorie Warren that first tried to change this. Warren believed that it was not only important to take care of the physical comfort of an elderly person, but also treat mental and emotional disturbances as well. Through her research, she found that elderly individuals that were cared for in this manner were more likely to become or stay independent.

Little attention was given to geriatric psychology, however, until the 1970's. It was around this time that many of the psychology pioneers of the day were elderly themselves, and they started dealing with age related problems, like Alzheimer's and dementia.

All school search, finder, or match results, as well as colleges and universities displayed as "Featured School(s)" or "Sponsored Content" are advertisers that compensate us for placement on this site. The resources, editorial content, and school evaluations published on this site are developed independent of the schools that advertise here.

Why Do We Need Geriatric Psychology?

As mentioned above, there are several special problems that might effect a person as he approaches old age.

Increasing physical problems, for instance, can often result in a person becoming less mobile and more reliant on other people. This lack of independence can sometimes have a devastating effect on some people, leading to disorders like depression. Terminal and chronic illnesses can also have a negative effect on an elderly person's mental state.

Some physical problems that come with old age can directly influence an elderly person's cognitive functions, like thoughts, memories, and behavior. Neurodegeneration, for example, is one of the most common causes of diseases like Parkinson's disease, Alzheimer's disease, and dementia. Although many of these disease are untreatable, doctors can sometimes slow the progression of the diseases and treat the symptoms.

Memory is another area that geriatric psychologists might focus on as well. As we age, our ability to retain and recall memories begins to wane. This problem is sometimes intensified by neurodegenerative diseases, like Alzheimer's disease. Memory problems can be rather frustrating, whether they are the result of the normal aging process or a more serious degenerative disease.

Many elderly adults also find that there is a reduction in their social circles as well. They or their close friends may be unable to leave their homes or travel short distances to visit with one another, for instance. They may even watch as their friends start passing away. These types of situations can often lead to loneliness, grief, and depressions.

Geriatric psychology can help in each of these cases and more. Professionals in this field can offer counseling to elderly individuals experiencing feelings of depression, frustration, anxiety, and grief, for instance. This type of counseling can help make elderly adults feel better, and family therapy can help their loved ones adjust better to the changes encountered with old age. Geriatric psychologists can sometimes help elderly adults deal with chronic pain and memory problems as well.

In short, geriatric psychology can help elderly individuals live out the rest of their days in relative peace and comfort, with a calm mind.

What Are the Education Requirements to Become Geriatric Psychologist?

Experience working with the elderly is also a must for any successful geriatric psychology career. Working with elderly individuals often presents certain challenges of its own, and it often takes a compassionate and patient person to excel in this area. Internships, volunteer positions, and employment working with aging adults is often one of the best ways to gain experience and find out if this type of career is the right fit for you.

What Does a Geriatric Psychologist Do?

First and foremost, a geriatric psychologist must be sensitive to the special needs of elderly individuals and their families. This is a delicate time in a person's life, and it must be handled as such. A geriatric psychologist must be caring, compassionate, patient, and understanding, whether they work primarily as researchers or directly with the elderly individuals themselves.

A clinical or counseling geriatric psychologist, however, will often work with elderly individuals to help them overcome a variety of different mental disorders. Some of the more prominent mental problems encountered during this stage of life might include depression, grief, confusion, and mood swings. Geriatric psychologists working with individuals suffering from minor problems will often be able to help them through counseling and therapy. One-on-one counseling is often very effective, but many elderly individuals also benefit from group therapy as well.

During the course of his career, a geriatric psychologist will often work closely with other individuals in the medical field. For instance, these professionals often interact with elderly individuals' primary care providers, especially if a chronic or terminal illness is present. A geriatric psychologist might also work alongside a geriatric psychiatrist, who can prescribe necessary medications, in cases involving severe mental disorder, such as severe depression or dementia.

Where Does a Geriatric Psychologist Work?

With the focus on the mental health of elderly individuals becoming more and more prominent, a geriatric psychologist will often have very little trouble finding employment.

Several different facilities might hire geriatric psychologist for a number of reasons. Private and government run research facilities, for instance, might hire these individuals to study the effects of aging on a person's cognitive abilities. In the past few decades, finding a cure for Alzheimer's disease is also another very important issue for geriatric professionals.

What Is the Average Salary of a Geriatric Psychologist?

According to the Bureau of Labor Statistics (BLS), geriatric psychologists providing direct patient care in a clinical setting earned an average salary of $87,450 as of May 2019.

Some of the top industries in which geriatric psychologists work, along with their average salaries, include: