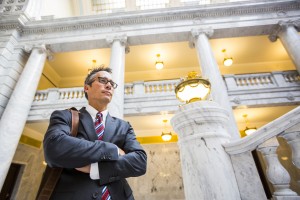 With roots that go as far back as the 1800’s, political psychologists have generally focused their studies on human behavior as it relates to political science, political party affiliation, voting, public perception of politicians, and law and government, and more so today, the implications of terrorism. Political psychology is also concerned with the decision-making processes made by politicians themselves, and their effect on the population as a whole.

A combination of a variety of fields – psychology, political science, government, education, economics, business, and communications – political psychology provides insight into how these real-world processes interact and impact political decision-making.

Political psychologists work in a variety of settings, serving a variety of functions. However, the bulk of political psychologists work directly with candidates running for office, by working closely with a politician’s communications team to direct the development of policy decisions that will score high marks with his or her constituents. Other individuals may work for local, state, or federal agencies studying voter behavior. Some individuals work for media outlets analyzing voter behavior, or work in research determining the root of political beliefs and how they relate to cultural, social, religious, economic, or other sociocultural factors.

Political psychologists must complete an undergraduate degree, with the bulk of coursework in psychology, political science, communications, and sociology. At this level, an individual may be able to obtain entry-level work analyzing campaign data or conducting polling.

To have greater employment choices and earn a higher wage, individuals must earn at least a master’s degree. There are many programs nationwide, including doctoral and certificate programs available to those who wish to focus on research or teach at the college level. At the master’s and doctoral levels, coursework will include: social psychology, political ideology, cognition, decision-making, and political beliefs and attitudes.

Because political psychologists do not perform therapy, there are no licensure requirements. However, most states will require licensure to use the title, “psychologist”.

There are many areas/sectors offering employment opportunities to political psychologists, including:

Although the field of political psychology has been around for many years, it is in a constant flux of change. As the world changes, so does this field of psychology. Whereas in the past, most political psychologist found themselves working with political candidates or in local and state government agencies, today countless opportunities lie in areas of international relations and terrorism, studying personality traits and the underlying behaviors of terrorist and terrorists groups.

The average salary for psychologists as a whole is about $92,000, annually. However, it’s not uncommon for political psychologists, employed by political parties, Political Action Committees (PACs), and/or political candidates to make significantly more money, particularly during election years.

How to Advance Your Career as a Political Psychologist

Although individuals who have earned a bachelor’s degree will find entry-level work and earn a respectable wage, those who wish to advance in their career or chose to work in other areas of psychology, or wish to earn a higher wage, must further their education and earn a master’s or doctoral degree.

It is also recommended that all political psychologists gain further knowledge and experience by volunteering or interning. This can be accomplished as a poll-taker for a local or state election, or as a research assistant in the psychology or political science departments at a local college or university. Another opportunity to enhance one's base of knowledge is to attend a prominent programs like the Summer Institute in Political Psychology through Stanford University. Other internship opportunities can be found through the International Society of Political Psychology, the American Political Science Association, or through local business and government.

Resources and Organizations for Political Psychologists

There are any number of organizations and networking opportunities available to political psychologists, especially during an election year. Just a few include: