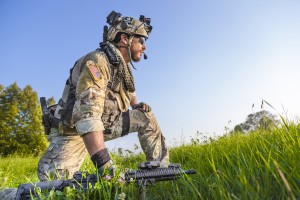 What Is Military Psychology?

Weeks, months, and years of active military service can often lead to emotional and mental stress, for both military personnel and their loved ones. War can seriously affect thoughts and actions. In fact, some studies have shown that the majority of enlisted men and women are affected by some type of mental or emotional disorder or illness.

The military men and women aren't the only ones that suffer. Family members and loved ones are often affected by being separated for long periods of time. Thoughts of their loved ones being in harm's way day after day can also add to the mental anguish.

Military psychology is a special branch of psychology that focuses specifically on military personnel and their families. This might involve performing psychiatric evaluations; assessing and treating mental and emotional disorders; and offering counseling services.

In the United States, every branch of the military employs psychologists that treat active duty and retired military personnel. Job titles of different types of military psychologists might include:

Enlisting in the military has caused numerous emotional and mental health problems throughout the years, so the idea of military psychology is not necessarily a new one. It hasn't been until recent years that mental health professionals and military leaders have begun to realize just how important the mental health of enlisted men and women really was. This field saw massive expansion during World War II.

Why Do We Need Military Psychology?

The men and women who serve in our military branches are one of our country's greatest assets. They serve our country to protect and defend its citizens.

Military psychology is necessary in order to help choose the best men and women for this job. Professionals in this field are also there to help ensure that the enlisted are in the best mental and emotional shape possible. Mentally and emotionally healthy military personnel are much more productive, effective, and stable.

Life after the military can also be very taxing and scary. Military psychologists, however, can help military veterans adjust to civilian life and calm their emotional turmoil after active duty.

What Does a Military Psychologists Do?

Individuals that pursue military psychology careers may find themselves with several different duties and responsibilities, depending on their specialties. They may conduct research, perform tests, or treat mental and emotional disorders.

Research in military psychology may be geared toward figuring out which personality traits are best for certain military positions. It may also focus on how to effectively treat some common mental ailments in the military, particularly Post-Traumatic Stress Disorder (PTSD).

Clinical and counseling military psychologists are responsible for assessing, diagnosing, and treating military personnel with mental or emotional disorders. They may be charged with trying to discover the extent of emotional trauma, for instance, and recommending a course of treatments. Some of the more common problems that plague military personnel may include PTSD, depression, grief, anxiety, and sleep problems.

Treatment of mental and emotional disorders suffered by enlisted individuals will usually vary, depending on the type and severity of the disorder. Military psychologists will often offer counseling and therapy, though. Cognitive behavioral therapy and exposure therapy are two very common treatment options used on those experiencing symptoms of PTSD and anxiety. Individual, group, and family therapy sessions might also be used as well. Enlisted military personnel might receive treatment at any time, either before deployment, during active duty, or after they return home.

Where Do Military Psychologists Work?

Groups of military psychologists might also travel with troops overseas during wartime. These combat stress detachments typically stay with troops in or near the battle zone and provide mental health services.

What Are the Education Requirements to Become a Military Psychologist?

Individuals pursuing military psychology degrees are also required to hold graduate degrees in a psychology field. Master’s and doctoral degrees can be earned either at traditional universities or at some military schools. Students who choose to earn their graduate degrees at military schools will usually have their tuition and living expenses paid by the United States military during the course of their education.

After earning a Doctor of Psychology (Psy.D.) or Doctor of Philosophy in Psychology (Ph.D.), students will then usually be required to complete an internship before they can start their military psychology careers. A student will choose a specific branch of the military that he wishes to work in, and the internship will generally last a year.

What Is the Median Salary of a Military Psychologist?

Military psychologists may be civilian psychologists providing services to the U.S. Armed Forces, or they may be enlisted officers.

Civilian clinical/counseling psychologists earned a median salary of $78,200 according to a May 2019 Bureau of Labor Statistics report.