How to Become an Army Mental Health Specialist 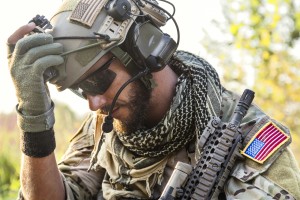 What Is an Army Mental Health Specialist?

Members of the armed forces, like the Army, often have difficult times - to say the least - when it comes to staying mentally and emotionally stable. These brave men and women go through grueling training, and are separated from their families when they’re shipped overseas to live in an unfamiliar world amidst unfamiliar cultures. Many Army soldiers witness and participate in violent and frightening acts of war. The constant fear of death and injury also hangs over them like a persistent storm cloud that they can’t seem to shake.

Needless to say, the mental and emotional health of an Army soldier is delicate and fragile.

Army mental health specialists are mental health professionals that are partly responsible for the mental and emotional well-being of Army soldiers. These professionals are specifically trained to treat soldiers suffering from a variety of mental disorders, both on an inpatient and an outpatient capacity.

Major depression and post-traumatic stress syndrome are two other very common issues that Army soldiers may have to cope with. Suicide is also a real threat for a large number of soldiers as well. Aside from these common mental health issues, mental health specialists will also usually be faced with treating other common problems, like anxiety disorder, stress disorder, substance abuse, anger problems, relationship problems, and organic mental disorders caused by head injuries.

Why Do We Need Army Mental Health Specialists?

Every year, thousands of active Army soldiers seek help for mental and emotional issues. In fact, it has been estimated, that roughly a third of all soldiers returning from Operation Iraqi Freedom received some sort of treatment for mental issues. Returning soldiers, however, aren’t the only ones that need help. New enlistees often have trouble adjusting to military life, and those on active duty tours will also suffer from a wide range of mental and emotional issues as well.

The Army in general strongly encourages soldiers to seek help when they have trouble coping with any sort of mental or emotional problem, no matter how big or small it is. Mentally and emotionally stable soldiers are more content and have higher morale, making them more efficient.

In recent years, the mental and emotional health of members of the military have been a hot issue. Although the Army is proactive in encouraging soldiers to seek mental help if needed, there is a shortage of military mental health professionals, and they are actively campaigning for more. By working as an Army mental health specialist, you’ll have the opportunity to serve your country and help fill the gaps in the Army mental health system that many soldiers rely on everyday.

What Do Army Mental Health Specialists Do?

During your Army mental health specialist career, you will most likely find that you have a vast array of different duties, depending on where you work. You might help new soldiers cope with and adjust to the rules, regulations, and general upheaval of enlisting in the Army, for instance. On the other hand, you might perform Post Deployment Health Assessments, which involve assessing soldiers returning from combat zones overseas.

Along with assessing and treating mental disorders in soldiers, Army mental health specialists also run prevention programs with the hopes of decreasing certain prominent problems. Suicide is a real problem amongst enlisted soldiers, for example, therefore, Army mental health specialists may run suicide prevention programs and speak with soldiers that are believed to be at risk of committing suicide.

An Army mental health specialist might also teach soldiers stress management and prevention techniques, which can help lower the risk of developing a mental disorder later. Some techniques may include breathing exercises, talking about problems, and keeping a stress diary.

Since soldiers overseas often experience a great deal of stress, Army mental health specialists might also be required to work in foreign Army bases as well. This often involves living and working in unfamiliar countries, providing mental health services to soldiers that are homesick, stressed, and experiencing culture shock.

What Are the Requirements to Become an Army Mental Health Specialist?

The majority of Army mental health specialists start with a bachelor’s degree in a field such as psychology, counseling, or social work. Some may even earn master’s degrees as well.

In order to be accepted as an Army mental health specialist, applicants should have a minimum ASVAB score of 101 in the Skilled Technical area. They will also be required to complete 10 weeks of Basic Combat Training, along with 20 additional weeks of Advanced Individual Training.

What Is the Average Salary of an Army Mental Health Specialist?

As an Army Mental health specialist, your salary will be determined by your rank as well as your experience. According to the Army website, the average active duty service member receives an Army benefits and pay compensation package worth $99,000. Non-cash compensation such as health care and retirement pay and subsidized food and housing represents almost 60 percent of this package. The website Payscale.com estimates that mental health specialists in the military make an annual salary of between $20,000 and $50,000 depending on rank and experience.