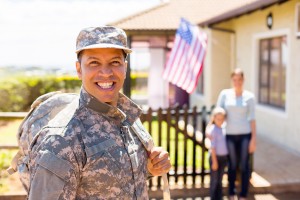 What Is Veterans Counseling?

Spending years in the military will often make it difficult for most people to adjust back into civilian life. For most veterans, past military service typically affects all areas of life, including relationships, family, finances, and career goals. Serving in the armed forces also typically has a big impact on a person’s mental and emotional well being as well.

Veterans counseling is a type of counseling that can be used by military veterans to adjust to the transition from military life to civilian life. Any veteran that was discharged under honorable or general circumstances in the United States typically has access to services, such as veterans counseling, regardless of their ages or ranks. Even today, veterans that served in all different wars - from World War II to the recent Middle Eastern conflicts - seek the services of veterans counselors. Counselors in this field also usually provide services to families of military veterans as well.

Mental and emotional health problems are some of the most important issues that veterans counselors may help with. For instance, they may help veterans and their families cope with mental illnesses, such as depression, anxiety, grief, and post-traumatic stress syndrome. Veterans counselors also usually help in other areas of the lives of veterans and their families. They may help these individuals search for and secure employment, for example, or they may offer marital and family counseling services.

How Do I Become a Veterans Counselor?

To become a veterans counselor you will need to go through a rather rigorous amount of schooling. This includes obtaining a Bachelor's Degree, then a Master's Degree, and finally entering into a Doctorate or PhD program. If you are serious about entering into this field of study, request information from programs available for you here.

Why Do We Need Veterans Counseling?

Today, there are millions of veterans living in America, who served in a number of different wars and military conflicts. Many of these veterans find themselves struggling with all sorts of problems related to their service. Even veterans that seemed to adjust relatively well after leaving the military will often find that their past has a way of haunting them years down the road.

During most of the major wars and military conflicts of our time, returning soldiers and veterans were often treated with the utmost respect. These veterans were often greeted with open arms upon their arrival, and parades were even organized in their honor. Unfortunately, soldiers returning from Vietnam were rarely regarded as heroes. Instead of being greeted with hugs and parades, they were often greeted with spit and angry chants of “baby killer”. Combined with the lack of veteran services, this hostile “welcome” made it more difficult for Vietnam veterans to readjust back into civilian life. Although some overcame these hurdles and went on to become functional and generally well adjusted members of society, many struggled with such things as mental illnesses, which made it hard to make the transition. In fact, of the millions of homeless Americans today, some studies have concluded that anywhere from a quarter to almost half are Vietnam veterans.

In short, military veterans gave up a large chunk of their lives to protect and fight for us and our great country. Forgetting them in their times of need is simply not acceptable.

What Does a Veterans Counselor Do?

Veterans counselors work closely with veterans and their families, in order to help them with all sorts of problems related to readjusting to civilian life after military service.

A veteran’s mental and emotional health are often a counselor’s top priority. Due to the horrific nature of the things that veterans see and experience during their service, many of these brave men and women suffer from such mental illnesses as depression, anxiety, and post-traumatic stress disorder (PTSD). Depending on the nature of the disorder, a veterans counselor may use a couple different types of therapy to help a veteran overcome it. Depression and anxiety, for instance, can often be treated using talk therapy or cognitive behavioral therapy. Treatment of PTSD, which is very common in military veterans, typically involves the use of cognitive processing therapy or exposure therapy.

Cognitive process therapy is a type of therapy that is used to help people confront negative or frightening thoughts and transform them into more positive ones, or at least benign ones. Prolonged exposure therapy, on the other hand, is a type of therapy that involves exposing an individual to a certain stimulus in increasing degrees until he is completely desensitized to it.

Veterans counseling does not just stop at mental and emotional health issues. Professionals in this field also usually offer marital and family counseling services, since military service can strain close relationships with loved ones. A veterans counselor will often try to work out problems between veterans and their loved ones during these types of therapies, for instance. They will also try to educate a veteran’s loved ones on the struggles ahead as well as how to help their loved ones cope.

A veterans counselor might also act as an advocate for veterans. This may involve helping them secure employment or fill out paperwork for veterans benefits.

Where Do Veterans Counselors Work?

What Are the Education Requirements to Become a Veterans Counselor?

While it may not be absolutely necessary, military experience can be very helpful for anyone pursuing a veterans counseling career. This type of experience can help future counselors understand the trials and struggles that veterans face.

In addition, those pursuing veterans counseling careers should also earn degrees in areas such as counseling, psychology, or social services. Bachelor’s degrees may be all that’s necessary for entry level positions, but many veterans counselors also choose to earn graduate degrees as well.

What Is the Average Salary of a Veterans Counselor?

The average salary of a veterans counselor might vary, depending on a number of factors. For instance, those with more experience and more education.