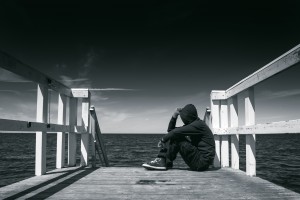 What Is Suicide Counseling?

Depression is never a pleasant feeling, but some people suffer from depression so severe that they contemplate taking their own lives. Unfortunately, thousands of people in the United States attempt to commit suicide each year. Sadly enough, a certain percentage of these individuals will actually succeed. According to a study done by the Center For Disease Control, suicide was the 10th leading cause of death in the United States in 2009, up one spot from previous years.

What many suicidal people don’t seem to realize in their last moments of despair, however, is that suicide is a drastic move, and one that can not be taken back. Death is permanent, unlike the problems that many people who contemplate taking their own lives face. After a person commits suicide, there is no going back. There are no “redos”. There is no fixing that mistake. In the end, there is just...the end.

Suicide often leaves nothing but devastation in its path. Family members and loved ones are forever tortured with questions like “Why?” and “Could I have stopped it?” Many of them will often be tortured with grief, remorse, and guilt for years after the act.

Suicide counseling, however, can be beneficial to anyone contemplating taking their own lives. This type of counseling can help people work their way out of the deep depressions that plague them and realize that there is something worth living for.

It takes a special type of person to become a suicide counselor. These professionals must be non-judgmental, compassionate, empathetic, and caring. Most importantly, though, a suicide counselor must have a genuine desire to reach out and help those in need.

How Do I Become a Suicide Counselor?

To become a suicide counselor you will need to go through a rather rigorous amount of schooling. This includes obtaining a Bachelor's Degree, then a Master's Degree, and finally entering into a Doctorate or PhD program. If you are serious about entering into this field of study, request information from programs available for you here.

Why Do We Need Suicide Counseling?

Research suggests that suicide - particularly teen suicide - has become more common in recent years. In fact, some would argue that it was an epidemic sweeping this nations. Despite the number of suicide prevention measures in place, the number of people the attempt and commit suicide is still climbing.

Suicide counseling can be used as a method to help suicidal people get their lives back on track, and step away from the ledge, so to speak. Individuals that seek the help of suicide counselors will usually get to enjoy the truly joyous moments that await them in the future, instead of depriving the world of their presence.

What Do Suicide Counselors Do?

A suicide counselor should first be able to recognize those that are at risk of taking their own lives. Although there are no suicide symptoms cut in stone, there are often a number of risk factors and warning signs that may precede suicide or suicide attempts.

Determining how much of a danger a suicidal person is to herself is often very difficult, but it can be done. For instance, a person with a complete and detailed “suicide plan” is generally considered to be more of a danger to herself than a person with no plan. However, whether a person is considered to be a low suicide risk or a high suicide risk, steps should be taken to keep her safe from herself. This is usually accomplished by a suicidal person being put under suicide watch, which can last anywhere from 24 hours to much longer. During this time, the suicidal person will be kept in a safe environment under the constant surveillance of medical and mental health professionals, including suicide counselors. The suicidal person might also be urged to speak with suicide counselors during this time as well.

There is no clear cut method for treating suicidal tendencies in people. Allowing these desperate individuals to talk about and explore their feelings, however, is sometimes all that’s necessary. During sessions with a suicide counselors, a suicidal person is often gently encouraged to talk about any problems they might be having in their life. At times, the suicide counselor may ask questions or offer encouragement, but it is usually the counselor’s duty to just listen during this time.

Certain types of therapy have also shown to be very promising for individuals contemplating suicide. Cognitive behavioral therapy, for instance, is often used to help people change their negative thoughts.

Along with counseling and therapy, a suicide counselor will also usually help a suicidal person come up with a safety plan that can be put into motion when they start to contemplate taking their own lives. These plans are often more effective when written down in “suicide prevention contracts”. For instance, when a person is feeling suicidal, she can promise to contact her counselor, talk with someone she trusts, go to the hospital, or call a suicide prevention hotline. A suicide counselor can also help a person in despair set up a support network of caring, non-judgmental individuals that she can lean on when times get tough.

Because suicide counseling can be such stressful and heartbreaking work sometimes, suicide counselors should also not neglect to tend to their own mental health regularly. Although they are the counselors, they themselves may sometimes need to seek the help of other mental health professionals in order to cope with things like stress, anxiety, grief, and depression.

Where Do Suicide Prevention Counselors Work?

Suicide counselors might work in a number of different areas. They are often employed by general hospitals, psychiatric hospitals, and mental health clinics. Branches of the military, schools, and social and human service offices also usually have suicide counselors on staff as well.

One of the most well known places for a suicide counselor to work, however, is at a suicide prevention hotline. These positions may be paid or voluntary, and they typically involve answering phones and talking to suicidal individuals.

What Are the Education Requirements to Become a Suicide Counselor?

Dealing with suicidal individuals is a very difficult and delicate line of work. Therefore, the proper education is extremely important when pursuing a suicide counseling career.

However, it is usually best to earn a bachelor’s degree in an area like counseling, human services, social work, or psychology when working toward a suicide counseling career. Degree programs in these areas will usually give you a much better and more in depth understanding of suicide as well as the mental and emotional disorders that surround it. While earning your degree, you should also take several courses that deal with such things as suicide and suicide prevention. You can also choose to earn a master’s degree in one of these areas, and concentrate your studies on understanding and preventing suicide.

What Is the Average Salary of Suicide Counselors?

The salaries of suicide counselors can vary drastically. Some, for instance, work as volunteers and make no money at all. Others may work for non-profit groups or hotlines, making little more than minimum wage. In general, suicide counselors that are employed by larger facilities, like hospitals, usually have the highest salaries.