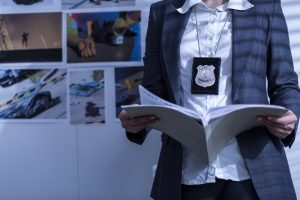 Police officers and law enforcement staff are routinely exposed to dangerous situations that threaten their own personal safety, working in an environment that has a variety of negative mental health effects, not only on the officers and staff, but also on their families. Moreover, police officers spend their days in frequent encounters with some of the most violent members of society: the mentally ill, drug addicts, and criminals, who are more likely to need mental health services. Additionally, because policing is such a dangerous career, officers and staff are heavily screened before they receive the gun and badge that go with the job.

Police psychologists also play an administrative role in that they help human resources departments determine which applicants might make the best officers, liaise between the police and the public, provide expert testimony, and supply leadership and training. In every role, a police psychologist’s job is to use psychological principles to make the work easier and provide clarity to every situation.

What Does a Police Psychologist Do?

A police psychologist performs a range of duties; however, every police psychologist’s primary purpose is to shed light on the inner workings of the human mind in situations when it is not apparent. They apply psychological principles when working with people inside and outside police departments, gather evidence and data to inform recommendations, clarify witness testimonies, advise officers during interrogations, and, in general, offer insight into the hidden compartments of the human brain when called upon to do so.

To perform their jobs at an optimal level, police psychologists need a variety of specialized skills and knowledge, including:

Police psychologists have a wide range of duties, but they’re most commonly hired to perform one of four tasks: assessments, fitness for duty evaluations, clinical interventions, and operational support.

Police psychologists have been used for decades to screen candidates who apply for jobs as police or public safety officers. Obviously, police departments must apply very high standards when hiring new personnel, but in actual practice, this is easier said than done. Since the mid-20th century, law enforcement departments have availed themselves of psychologists to assess the suitability of potential candidates. Police psychologists recommend those candidates who appear to be a satisfactory psychological match and rule out those who are inappropriate – or who may even be dangerous in the position.

Evaluations for fitness for duty take place in a wide range of workplace settings, such as construction or medicine, but in no situation are these evaluations more important than in law enforcement. Officers who take time off, suffer a physical or mental setback, or who perform poorly must be examined to determine whether they are able to resume their duties. Sometimes, they are not mentally or physically sound, possibly because they are incapable of going back to work after a distressing incident, or because they are experiencing difficulties in another area of their lives that compromises their ability to behave safely and professionally.

Police psychologists also are frequently called in for clinical interventions. Because traumatizing events are much more likely to occur in police work than in other jobs, police psychologists stay busy, offering short-term behavioral treatments to help traumatized police officers cope with their experiences. They also may intervene to help shell-shocked victims or vulnerable witnesses assist in investigations, and they frequently assist family members of both officers and victims in learning how to respond to stressors in a healthy manner.

Lastly, police psychologists are called upon to provide operational support. For instance, they often assist with the paperwork involved in the staffing, interviewing, hiring, evaluating, and training process of law enforcement officers.

Under the broad umbrella term of “psychologist,” the U.S. Bureau of Labor Statistics (BLS) reports that police psychologists can expect to earn an average of $75,230 per year, or $36.17 per hour. Job prospects for police psychologists are extremely positive, with psychology jobs of all kinds projected to grow 19 percent between 2014 and 2024.

While many police psychology positions are classified as clinical, others fall into the fields of experimental, social, or industrial-organizational psychology. Working outside a clinical role typically means a higher average salary, according to the BLS, with an average of $94,650 a year.

Specific jobs also may generate higher salaries. For instance, some police psychology job postings stipulate a beginning salary of $78,728–$124,634 a year, which indicates that the longer a professional practices in the field and the more qualifications earned, the more he or she can make.

While day-to-day duties vary widely, a police psychologist’s primary role is to work with police officers, public safety staff, families, victims, witnesses, members of the legal and judicial system, and others involved in or affected by law enforcement. Typical duties on any given day may include:

This list is incomplete, but it indicates the breadth of typical situations a typical police psychologist may encounter over the course of a single day, week, or month.

While a doctoral degree is not required to work in the field of police psychology, you cannot practice as a police psychologist without a Ph.D. The doctoral degree signifies that the applicant has undertaken extensive training in both psychological principles and police work. The doctoral program must be accredited by the American Psychological Association, and at least 100 hours of education must be earned that are directly related to police and public safety psychology.

Candidates are required to complete a post-doctoral internship or fellowship in police psychology, as well as one to two years of supervised training by a practicing police psychologist, for a total of 3,000 hours of direct work experience in a police psychology setting.

Most universities do not offer a degree in police psychology, which means that many students first acquire both an undergraduate and graduate degree in psychology to provide a sound background in the field. A master’s degree in fields such as applied criminology, forensic psychology, or mental health counseling, for instance, allows the student to secure entry into a reputable doctoral program, which also may include studies in clinical psychology or forensic psychology. Students who wish to make police psychology their career path should choose a degree program with a focus on law enforcement.

The rules for police psychologist licensure are very strict. While no specific license to practice as a police psychologist is required, those who wish to use the title “psychologist” in any state must first earn a master’s degree, after which they can apply for a license. Licensure requires successful completion of an exam administered by the applicable state’s licensing board. All U.S. states are governed by the Association of State and Provincial Psychology Boards, and licensure requires passing the Examination for the Professional Practice in Psychology (EPPP). The EPPP is a 225-question exam that tests students on the foundational principles of psychology, behavior, assessment, diagnosis, and other core subjects.

After passing this test and earning a license, the candidate can apply for a doctoral program, or, if he or she has already completed the program, for board certification in Police & Public Safety Psychology, also offered by the American Board of Professional Psychology. To receive certification, the candidate must graduate from the Ph.D. program and complete the supervised internship.