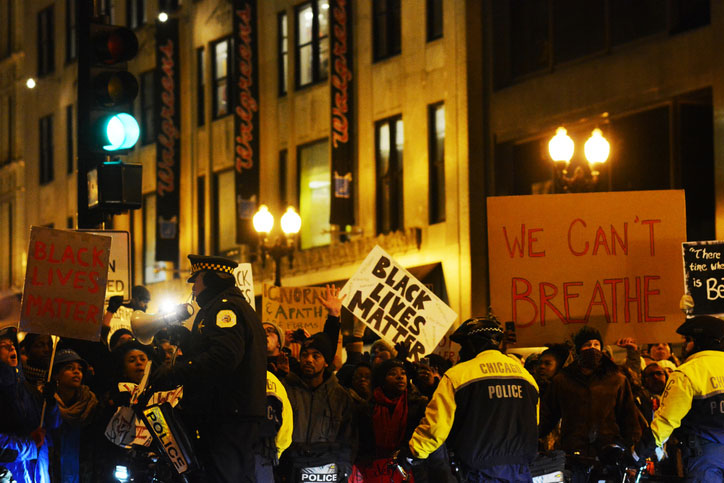 As if the psychological health and well-being of the American public wasn’t already impacted enough by the COVID-19 pandemic, the June murder of George Floyd in Minneapolis set off a simmering pile of racial and social justice issues. Probably primed by extended periods of isolation and growing unemployment, the unrest burst into open protest in cities large and small across the country. In fact, the movement is growing worldwide now, with sympathetic protests emerging in France and Britain among other countries.

Much of this tension has become focused on a simple slogan: “Defund the police.”

Like most slogans, this three-word sentence has been spread a little thinly across the top of a lot of different ideas and intentions for police reform – from literally doing away with law enforcement, to a more tempered package of targeted reforms that seek to re-allocate money that would otherwise be spent on military style equipment to fund de-escalation training.

Social workers have greater insight into the issues than most people and have been thinking about them for a lot longer. Social justice advocates have developed a package of suggestions about how to make the most of the apparent willingness of the country to make big changes right now in law enforcement and race relations. Here are their top five priorities for future police reforms.

Psychologists well-understand the role that “the other” plays in racism and abuse… the tendency of humans to segregate and reject those they believe to be unlike themselves, dehumanizing and blaming them. It’s still a major feature in America and American politics, and it’s exacerbated in policing because in many big urban centers, the police and the people they are policing are not drawn from the same political or socio-economic groups.

A major goal for many social justice advocates is mandating that police live within the communities they serve. Unfortunately, this is a cause that may require the exact opposite of defunding the police, because those urban areas have higher costs of living… and that may require real pay bumps for officers to be able to return from the suburbs and live in the cities.

In addition to living among those they police, social workers encourage cops to have more normal and positive contacts with them. In Camden, New Jersey, for example, one of the places where a police department was effectively defunded and replaced, new rookies on the beat have to go around and knock on doors to introduce themselves to the neighborhood where they will work. It’s a small, but important human interaction to build a rapport that has been lacking in American policing for far too long.

Law enforcement personnel are necessarily trained in the use of force and getting compliance from criminals who must be stopped and taken into custody. That’s exactly the wrong tool set to use with someone experiencing a mental health crisis, or deep in the throes of drug abuse, or even just temporarily homeless after losing a job.

But decades of defunding of social services, combined with the very real societal issues that require someone to handle those situations, have put police in the role of first responders to exactly those problems.

Rebuilding the social work safety net and providing for around-the-clock social services response to those types of crises could dramatically defuse potentially deadly incidents and is a cornerstone of current reform demands. In fact, most calls to defund police departments simply involve shifting some of that money back into social services.

Going one step further, many psychology professionals prefer to get ahead of the issue of crisis response by refocusing on prevention instead. They call for new and better-funded programs in areas like:

All of them are intended to limit the need for police intervention, and so minimize contacts that can potentially turn dangerous and deadly. Again, these are areas where much more funding and support are needed, from hiring additional social work and counseling professionals, to opening more treatment venues.

Who polices the police is an ancient question with no firm answer. But who the police must answer to, ultimately, is the society they patrol. That thread has been cut in many American cities and states, with powerful unions, disinterested politicians, and well-funded special interest groups operating as the final check on police power. And, as we’ve seen, it’s not much of a check.

Real citizen oversight, with teeth, is the solution social workers prefer. But while protesters envision this as a way to de-legitimize or reverse unpopular police practices, social workers understand that it involves the same type of integration and understanding as community policing does for the police themselves. Citizen oversight involves bringing more reformers and average citizens into the world and mindset of law enforcement to help build consensus solutions for the difficult challenges they face.

Finally, social justice advocates are moving for a broader re-evaluation of the role of law and punishment in society. The American criminal justice system is built around incarceration, and most laws lead to possible jail sentences. The role of prisons in sustaining the criminal lifestyle in the United States is well-documented, as a 2019 Scientific American article discusses. Not only does criminalization ruin lives, but it’s not even effective at deterring violent crime.

Better ways have been found to incarcerate and rehabilitate violent criminals, and to decriminalize victimless crimes. Examples of this can be seen in countries such as Sweden and Norway, where the focus is more on outcomes than on punishment. As a side benefit, this more humane, individualistic approach is better for mental health and basic human rights, and, counter-intuitively, the mental health and occupational satisfaction of prison staff themselves.

As a package, these five major reforms may seem overwhelming. But there is a real sense among the American public that this time could be different.

And, although pick-up protesters might struggle to accept it, many social workers already realize that police can be some of their biggest allies in these causes. Few cops join up for the joys of dragging overdose victims off the sidewalk or dealing with people having a psychotic breakdown. The job has shifted to them by default, as the last resort, and they are bearing the brunt of the blame for a situation that society has ill-equipped them to handle. Most would like nothing more than to get back to catching robbers and protecting society from violent criminals instead.

Now is a time when everyone seems open to big ideas, and these five could go far in contributing to lasting changes that help bring equality and prosperity to all American communities.