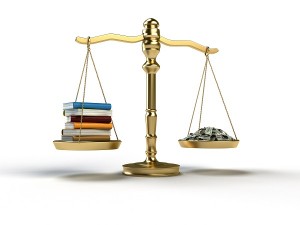 Thinking about what your student loan repayment schedule might consist of prior to enrollment in college is an admirable assessment to be making. Obviously the exact figures can only be calculated when the variable amounts are disclosed: tuition cost, rate of interest, months allotted for repayment etc.; and your financial aid advisor will be able to provide those specific numbers or at least a generalized estimate. That being said, there are many positive aspects to your particular academic pursuit which should serve to alleviate any fears you may have concerning student loans.

#1. You are entering one of the fastest growing fields in the nation

A careful survey of the BLS site will further encourage you in terms of the preciseness with which growth is anticipated geographically as well as the approximations of salary potentials.

Robert Ward M.A., MFT, took a leap of faith in pursuing his career as a marriage and family therapist. He had no savings, could not juggle a job along with academics, and he had a baby on the way. He managed the stress (both emotional and financial), persevered and now is a licensed counselor.

“While I wouldn't recommend jumping in with both feet as I did (with a baby on the way); if it’s a choice between jumping in or not going for the degree—JUMP. There are always solutions for those who are working hard and have a strong career goal. I’m not going to say there weren't tough times, but there are tough times in life no matter what. Hang in, do what you have to do, things somehow take care of themselves.”

#2.  The Government is Behind You

One of the main reasons why the MFT field will be experiencing such rapid and prolonged growth is the recent implementation of the Affordable Care Act. Beginning in 2014, health care insurers are subject to a “parity” provision which in essence requires every insurer to provide equal access to mental health care as physical health care. This means that millions of people who could not seek out therapy are now covered under their insurance policies.

In an article published by the United States Department of Health and Human Services,“Affordable Care Act Expands Mental Health and Substance Use Disorder Benefits and Federal Parity Protections for 62 Million Americans” the following statement is made:

“The Affordable Care Act builds on the Mental Health Parity and Addiction Equity Act of 2008 to extend federal parity protections to 62 million Americans. The parity law aims to ensure that when coverage for mental health and substance use conditions is provided, it is generally comparable to coverage for medical and surgical care. The Affordable Care Act builds on the parity law by requiring coverage of mental health and substance use disorder benefits for millions of Americans in the individual and small group markets who currently lack these benefits, and expanding parity requirements to apply to millions of Americans whose coverage did not previously comply with those requirements.”

What these statements mean for you as a future MFT is that there is a federal mandate requiring insurers to cover mental health benefits for millions of Americans who hitherto had no access to care. Therefore, you have every reason to celebrate your choice in careers and move forward with great faith and confidence in future market conditions.

#3.   Student loan obligations have never stopped a fiercely determined person from being successful.

While no one enjoys or wants to incur debt, sometimes it is the only way to get from where you are now to where you want to be in the future. Careful strategizing (ahead of time) will take away the shock factor upon receiving your first loan repayment schedule. Additionally, most lenders will work with you regarding your monthly payment amount; they want you to be able to meet your obligations.

Tracey Sealy M.S.—MFT was less than enthusiastic at borrowing money to finance her academic pursuits, but she developed an unusual mindset and overcame her former hesitancy;

“I almost didn't go to graduate school because of the debt I would have to incur. However, my mom pointed out to me that when I was born my parents had no health insurance. While she was in labor she shared her feelings about how high the bill might be with her delivery nurse. The nurse gave her the best attitude advice ever; she said that the most important thing was that my parents would walk away with a precious baby and that the bill would eventually be paid off. I decided to look at my education in that same way; I would have my license to practice and the bill would eventually be paid down. I’ve never regretted making the decisions I have made.”

While no one wants to spend money before they are making money, financing an education is more than an investment. Financing an education is almost like an insurance policy you give to yourself; in effect you are promising yourself that your future will be better than the present. The future will be better because you will be more employable, more informed as well as being a renewed and more disciplined person for having survived the rigors inherent in the academic process. Besides, investing wisely in oneself is always money well-spent, even if it comes with interest.