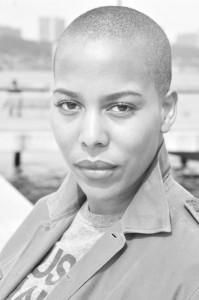 Everyone has their own path in their education and their careers.  It is quite normal for life to lead us down a windy path until we find the perfect fit for our aspirations, goals and pursuits.

That same story happened to Asha Tarry, a Social Worker in New York.  Asha began her educational path as a nurse and somehow along the way realized that Social work was actually a better fit.

Tarry represents the Entrepreneurial side of social work, starting her first non-profit organization called "The Collective Advocates for Social Change & Development".  Asha's current project focuses on Campaigning against Human Trafficking.   If that doesn't get your Social Work juices flowing, we don't know what will.

Following a story like Tarry's is not only inspirational, but educational.  Read more about who Asha is, and how you can find yourself doing something similarly worthwhile for society.

Can you tell us about your education?

I went to private school my entire life. I graduated from Pace University in 2000 with a B.A. in Human Services. Immediately following undergrad I entered Fordham University Graduate School of Social Work and graduated with my Masters in 2004. I have also completed a 1 year post-graduate Certificate program in Psychodynamic Psychoanalytic training in Object Relations in June 2011.

How did you first become interested in social work and awareness?

Initially, I entered college as a Nursing student, but after two years of hard studying and barely getting by, to my surprise, especially since I was a top student in high school, I changed my major to Human Services in undergraduate school. I loved the learning and advanced training my Adviser and professor, Dr. Marie Werner provided. She encouraged me and a few close friends to pursue graduate studies immediately following graduation. Pace University didn't have a Social Work program and Dr. Werner, a Columbia University graduate of Social Work herself, mentored us all along the way. It was an amazing experience being in her classes and learning how to apply our studies to our life's experiences. Also during my time at Pace, I was introduced to community outreach. It was through a class in Human Services that I was introduced to a community based organization that I later volunteered with for two summers. I volunteered with HIV/AIDS clients and it changed my life.

What was the hardest part of your education? Did you have any setbacks, challenges, or epiphanies along the way? What advice would you have to some having difficulties on their educational path?

I worked my entire graduate career and I was very young at the time, 22 years old when I started graduate school. I also started my first professional job the same year. Fortunately I was on a 3 year track in graduate school and my first year I only took two classes on Saturday while I worked in the field Monday-Friday. It was more manageable that way. I could learn and work in my area of interest simultaneously. I did have a setback in one of my classes which I had to repeat twice. I was horrified but I just became exhausted with school by my last year and I think I wasn't trying as hard. The best advice I would give to anyone is to take your time. Set a goal for yourself but be realistic and know that sometimes your goals may change, including when you want to graduate. If you can't work full time and attend school full time, take a semester off or lessen your class load and maybe pick up 1 summer class. That's what I did. I think in doing that I gave myself permission to not be an overachiever and learn at a pace I was more comfortable with. I also sacrificed a lot going to school and working at such a young age. I don't regret it but I would also say, take your time and enjoy life too.

Tell us about The Collective Advocates? Why did you form it? What is the goal and plan to be deemed a successful venture? What are some of the greatest accomplishments thus far?

The Collective Advocates for Social Change & Development, Inc. is a nonprofit organization. We launched the company to the public on Friday, February 1st. It was a 35th birthday gift to myself, on my actual birthday. I formed it for several reasons. I was already head of a grassroots association called The Collective Advocates and we were growing in our awareness and I wanted to make things more official to the public. I learned about more social issues and I see the frailties in our society, the social injustices and the failing economy and I wanted to give something to communities who suffer the most. I wanted to create systemic changes in families and communities and mentor people in social justice. My goal is to create national social justice campaigns, advocates and self empowered people. Some of our greatest accomplishments to date have been working with the U.S. Fund for UNICEF in raising awareness about human trafficking. Since first collaborating with them we have created a yearlong campaign on our own. We have begun building other community partnerships around the nation, including one with an international human trafficking organization, iSanctuary. Now we are their NYC Chapter. We are also proud that advocates from around the nation want to get involved to raise awareness. We always need more advocates (volunteers).

What aspects of your education and training have been most crucial to your success? Give us some examples of the day-to-day processes?

Organizational skills and an interest in reading. My interest in reading has actually grown since becoming an advocate/activist. You have to be interested in people's lives and what's going on in the world, not only in the present but in the past too. Also, being organized just caps everything off. I couldn't do any of this work if I didn't learn early how to balance multiple things of equal importance. Plus, small business coaching always helps! And I've been receiving that too. Everyday, I have to supervise my Social Media & Marketing Accounts Manager. Her work includes managing all of our social media. I even set her up with short-term social media coaching from an outside source. I also mentor Social Work students and graduates in an informal setting and they have become advocates for my organization. I network all the time, on social media and at events. Less than a year ago I checked Twitter a few times a week. Now I tweet multiple times a day and create dialogue through all forms of media. I have to read tons of emails and reach out to potential partners, seek out funding sources, seek professional development for my Board, grow my Board of Directors and Advisers, write for the blog. It's a lot and I do this 7 days a week, nights too and after my full time job as a Medical Social Worker for a for-profit company.

Who/what are some of your biggest influences? Any recommendations of authors, speakers, or experts you suggest to follow for folks interested in social work as a career? Do you have recommendations of groups and organizations for someone new to the industry should follow/join? Is it necessary to join these organizations to be successful? What is the value of being a part of them?

My biggest influences have been my professors and women and men who were seasoned professionals, meaning people ten or more years in the field. I would say read everything; books on social justice, community building, social movements. Definitely take some business classes, a law class as an elective, like I did, which came in handy. As for organizations, that's a personal preference. I didn't join my professional organization though it was often recommended yet I still sat on a Committee for a clinical organization years later. It's important to really just be an explorer of different organizations and in the end something will speak to you on a personal level. Now is a really good time in history to be a part of a social movement or cause. People want to learn and do conscious work. It's not a necessity though to be successful, but the affiliations can help later for job referrals, references or consultation if you think you may want to own your own business some day.

Can you give examples of the industry research you have performed and how you got involved? What are you working on currently and why?

Currently, I'm working on our organization's yearlong campaign about domestic human trafficking. I became involved after years of following mentoring organizations and learning about trafficking. I went to an Advocacy Training last spring in Virginia hosted by IJM (International Justice Mission) and from then on I was learning about and meeting survivors and advocates. I want to continue with this work by creating dialogue on domestic human trafficking because so many people deny it exists here in America and so many children and vulnerable people have been and are at-risk. I want to prevent more children and people from going missing and not getting the attention they deserve. I want to educate the public about our ties to this issue of modern-day slavery, currently and still. I want to help people take the focus off of the media's attention on more trivial things and put into action more important work.

If you could go back in time and choose to do your education all over again would you choose the same path?

I would absolutely choose the same path. Everywhere I've been has gotten me to this point. I still have an interest in the body and mind connection I learned in Nursing and carried over to Human Services and Social Work. I don't think I ever would have become an entrepreneur either if I stayed in Nursing. I'm grateful for everything. I've met wonderful people along the way I may not have had the chance to know if I didn't have all of the experiences I've had.

Any final words for the future social workers who are reading this?

My final words are these--read, volunteer and take classes in computer programs such as Excel and PowerPoint. Don't only study your craft, though it is important you pay close attention to it and work on applying it, but also be aware that at this time in the world you have to diversify your portfolio because when you get into the working world you need to know how to apply more than what you learned in your textbooks.