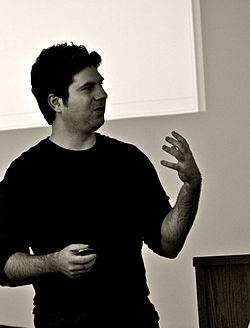 Now he is an adjunct assistant professor of psychology at New York University, where he teaches courses on cognitive psychology and human intelligence and specializes in the development of intelligence, creativity, and personality

He is also the author of Ungifted: Intelligence Redefined, co-founder of The Creativity Post, and blogger for Beautiful Minds for Scientific American Mind. He also is on the editorial board of two open-access journals: BioMed Central (BMC) Psychology and Journal of Intelligence.

Can you describe the field of psychology you are in?

I'm interested in individual differences. Things like, how and why do people differ from one another in personality and abilities? Also, how can traits be developed and nurtured? In my research, I draw a lot on the fields of cognitive, developmental, and personality psychology.

Why did you decide to become a cognitive psychologist, what drew you toward this field?

Ever since I can remember I was interested in individual differences. I would watch kids on the playground and notice how much the kids differed from one another in temperament and abilities. Also, I grew up with a learning disability, and thought a lot about human potential. I was excited to eventually get a chance to formally research and write about these issues.

What does your job as a cognitive psychologist entail?

I've taken a nontraditional path. I don't have a tenure track academic position. I decided to put together just the life I always wanted to live. So my job isn't as a cognitive psychologist, per se, but as a person with a Ph.D. in cognitive psychology who writes about all areas of psychology for a popular audience, helps run a website on creativity called the Creativity Post and is helping to cause an education revolution on The Future Project, which aims to help inspire kids to live the life they want to live. I do, however, collaborate with other psychologists in academic positions. We conduct research on a variety of topics relating to intelligence, creativity, and education.

What kind of education did you need in order to pursue and or be successful in your career field?

A Ph.D. in Cognitive, Personality, or Developmental Psychology or a Doctor of Education (Ed.D) degree should do the trick.

Can you describe an average day in your line of work?

Lately, my average day consists of writing. I am currently working on a book about intelligence, imagination, and education.

What are your favorite things about being a cognitive psychologist?

It allows me to learn so much about human nature and human diversity. The fundamental cognitive processes that interest cognitive psychologists-- learning, reasoning, memory, perception, etc.-- play a role in virtually everything we do as humans. I can use cognitive psychology as an excuse to study basically anything involving human behavior.

If you could name 2 things you don't like about your career what would they be?

Since I've taken a non-traditional career path, money is a serious issue. Having no regular income, I don't have much job security. Also, there's potential for scorn and ridicule from those who've traveled a more traditional path.

What challenges should they expect?

Graduate school can really kill creativity. Make sure you pick an advisor who gives you the freedom to explore your own ideas. I was very lucky in this regard.

What characteristics should they have or acquire?

The most important skills for being a cognitive psychologist are curiosity, openness to experience, discipline, and patience. Experiments often don't work out. Journal articles are often rejected. You've got to do it for the love of knowledge, not for recognition from your peers.

Do you see the field of cognitive psychology changing, and what should we expect in the future?

The field is constantly evolving. Right now, neuropsychology is hot. Cognitive psychologists are developing new methods to better understand what happens in our brain while we think, reason, and make decisions.

What kind of demand for cognitive psychologist do you see right now and in the future?

A great demand. Cognitive psychology has implications for nearly everything we do, including drug interventions, identification of learning disabilities, safety of texting while driving, eye witness testimony, you name it. Everything.

For more information about what exactly a cognitive psychologist does and how to become one, please feel free to visit our Cognitive Psychology page in the careers section of our website.