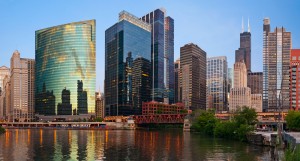 It might be surprising to know that Illinois is one of the largest producers of psychology graduates in the entire country and it can thank its biggest city, Chicago, for much of that. Despite the vastness of the state, Illinois has just one city with a population of more than 200,000. Luckily for students interested in postsecondary education in Illinois, that city is Chicago, one of the largest industrial centers in the entire country. But the state's higher education system is not defined by the city of Chicago. There are 235 degree-granting institutions in Illinois and those institutions enrolled more than 800,000 undergraduate and graduate students in 2014 according to the Illinois Commission on Higher Education. The majority of those students are actually enrolled in one of Illinois' many highly regarded community colleges but there were also more than 200,000 students enrolled in the state's public universities. In 2014, the state conferred more than 208,000 degrees ranging from Bachelor's degrees to PhDs and while subject-specific degree data isn't tracked by Illinois itself, it is safe to assume that the state conferred more than the  3,852 bachelor’s degrees in psychology and 1,651 master’s degrees in psychology they conferred in 2010.

Students who wish to study psychology in Illinois are afforded plenty of different choices and will also have plenty of like-minded people to meet and work and learn alongside. The state’s postsecondary education institutions are not limited to Chicago and the range of choices can include some of the most prestigious universities in the country, to public research institutions with excellent reputations. Of course the large number of choices is a double-edged sword.

Narrowing down options through research can prove daunting and psychology is a subject where different degrees open different career doors, and it can be very hard to find other ways through the door. Add this to the fact that the average annual cost of enrollment for a full-time student in Illinois was $23,096 for in-state students attending public schools and $38,629 for students attending a private institution in the state in 2014 and one realizes why choosing the right psychology school for them should not be taken lightly.

Understand that these will only be a sampling of the psychology schools, degree programs in Illinois and students should conduct their own thorough research before making a final choice.

Frankly put, there are few cities in the country that offer as much to aspiring psychologists as Chicago. Whether you come only for the education or whether you stay to start your career, Chicago offers an unparalleled combination of quality psychology schools, employment opportunities in the industry, and competitive salaries.

If you are looking for more options, check out our school listings for a more expansive and detailed look at online psychology schools in Illinois and programs in your area.

Just remember as you are choosing, that the school you select should offer the right type of programs and classes for you to ultimately open the career door you desire. A bachelor’s degree will be easier and cheaper to get, but it doesn't qualify students to become a licensed psychologist, only a psychologist assistant and maybe some research positions. In fact, according to a survey from O*NET Online, 84 percent of respondents thought clinical psychologists needed a doctoral or professional degree to work in the field and in Illinois students will need a doctoral degree from a clinical, counseling or school psychologist to apply for licensure according to state law.

Career Opportunities for Psychologists in Illinois

More good news is that the profession continues to grow at a solid pace. The Illinois Department of Employment Security, Economic Information and Analysis Division expect employment in the profession to grow 10 percent statewide from 2008 to 2018. To put that into perspective, that means by 2018, the state projects there to be another 580 employed psychologists and also projects 220 new job openings, which is a lot of awesome opportunity for students aspiring to start their psychology careers in Illinois.