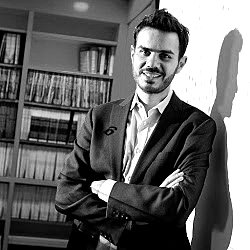 He has spent most of his professional career in academia working as a post-doctoral fellow and research assistant at Harvard and his current research focuses on human cooperative behavior.

He is also an accomplished author and has written about the role of intuition in promoting pro-social behavior, the limitations of costly punishment for enhancing cooperation, the strategic importance of leniency and forgiveness, why evolution might lead to both fairness as well as anti-social punishment where non-cooperators pay to punish cooperators, and the role in-group bias plays in human cooperation. His other interests include the possibilities the internet offers for incentive-compatible behavioral research, applying infectious disease models to social contagion, modeling systemic risk in banking (and other ecosystems) and understanding the knowledge dynamics of scientific discovery and publishing.

After I graduated, I worked at a bio-technology startup. It was all right, but I didn’t love it. The summer before I started at Harvard, my father-in-law gave me a behavioral economics book. I read it and thought it was awesome. It was way more interesting than what I was doing. Thinking about the book I read, I knew that I wanted to do experiments with people but I wasn't really a psychologist.

I went to someone’s lab meetings because I thought it was cool and eventually became immersed enough that I started thinking about psychology. Then, when I was looking for a professorship, the people that I was most excited about and the people I felt most at home with were the psychologists.   So I didn’t actually realize I wanted to be a psychologist until I got the professorship.

Your journey is an odd one and it seems tough to define you as a certain type of psychologist? How would you describe yourself?

I certainly don’t think I fit particularly into the different psychology subcategories. But I would describe my work and interest as social cognition with a biological and evolutionarily informed framework.

I consider myself equal parts psychologist, experimental economist, and evolutionary biologist, although the psychology part of my identity will become more pronounced as I start my professorship.

What sort of psychology work are you doing right now? What are some areas you are studying now?

I am interested in studying cooperation, specifically why people sacrifice their neuro-self-interest for the good of others. The other part is trying to understand the cognitive mechanisms that are going on while people make these decisions.

So we are working on the question of whether our first impulse is to be selfish and then we have to stop and think to be cooperative, or vice versa. We put four people in a group over the computer and give each of them five dollars. Then we ask them to decide how many dollars to keep and how many to contribute to a common group project. Then we ask questions like what makes people more willing to pay to help others.

See David's Recent Talk about his work below or on poptech.com

Why did you want to become a psychology professor given your rather unlikely career arc?

For me it’s totally about freedom. Every day, I get up and try to think of cool stuff that would be interesting, and then I try to do it, it’s really fun. I have played in rock bands so music is a big part of my life, and my attitude to science is very similar. I want to make stuff that I think is cool.

I am always trying to be creative and execute new ideas in an elegant way and when you are working for a company, it’s not often like that. I taught a class at Harvard and I was a teacher’s assistant in classes before, and you get to share your enthusiasms with people who don’t understand that.

How do you expect to teach your students about the finer points of different types of psychology without a formal or traditional background in the subject? Do you worry about being able to connect to a student taking an introductory psychology course?

I just have to learn it. One reason I am excited to teach an introductory class is then I will be forced to learn all of that stuff. I am very much not impressed with the importance of in-class learning, particularly given my strange trajectory because almost everything I do now, I haven’t taken a class.

I learn by working with people, sort of an apprenticeship model. The way I think of it is, when you are teaching a class you are giving a performance. The onus is on you to get people into it. It’s similar to when you are playing a show. There are people who want to see you and people who couldn’t care less, and you have to try and satisfy all of them, so I see it as a fun challenge.

Where do you find most of the funding for your research? Do you rely mainly on government grants?

Most of the funding for my research does come from government grants or from grants from private philanthropic groups and you do get some money from the school when you start. One of the good things about social psychology is that it’s pretty cheap to conduct experiments. It’s not like biology where we would need like a million dollar microscope. But people spend much less time writing grants in psychology than they do in other subjects.

What advice would you offer to someone who is interested in pursuing a career in psychology?

You want to find something for you to love and it won’t happen right away. Keep searching and trying different things until something clicks for you. For me, all the other stuff was just alright, and when I discovered what I do know, it just exploded for me. It was like falling in love and I have been able to be successful because I love it and I am consumed by it in a good way. You should also keep in mind that, by end of undergraduate years, it is still completely reasonable to still not have any idea what you want to do.