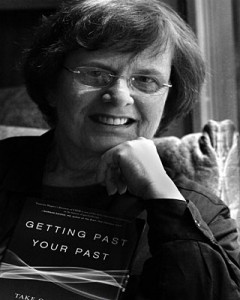 Dr. Francine Shapiro is a clinical psychologist with a PhD from the Professional School of Psychological Studies, San Diego and Shapiro is credited as the originator and developer of Eye Movement Desensitization and Reprocessing (EMDR), an increasingly popular form of psychotherapy used to deal with trauma.

Originally an English Literature major, Shapiro is now a Senior Research Fellow at the Mental Research Institute in Northern California, the Executive Director of the EMDR Institute, and the founder of a non-profit that coordinates disaster response and low training fees across the globe.

She is a frequent speak at psychology conferences across the country and has written and co-authored more than 60 articles, chapters, and books about EMDR, including Getting Past Your Past: Taking Control of Your Life with Self-Help Techniques from EMDR Therapy  and  EMDR: Eye Movement Desensitization and Reprocessing: Basic Principles, Protocols and Procedures.

Can you tell us a bit about your career as a Clinical Psychologist?

I have been a practicing clinical psychologist since 1990, so for 22 years now. I developed EMDR psychotherapy.

EMDR is an accepted treatment modality with a wide range of applications. It's recognized worldwide as an effective form of trauma treatment.  In the US that includes the American Psychiatric Association and the Department of Defense.

Can you tell us a bit about what EMDR is?

EMDR stands for eye movement desensitization and reprocessing. When I developed it, I was a behavioral psychologist, and the term “desensitization” was used to describe a process for decreasing anxiety, and so I named it accordingly.

But EMDR ended up being so much more than desensitization. If I could go back I would have called it Reprocessing therapy. But now it's just too well known as EMDR therapy to do that.

EMDR is a form of psychotherapy that allows people to rapidly deal with negative responses and symptoms. For instance, there are more than 20 randomized studies that show that EMDR is highly effective with post-traumatic stress disorder (PTSD). Three of the studies showed that within the equivalent of three, 90-minute sessions, 84-100 percent of single trauma victims no longer had PTSD.

Can you tell us about how the EMDR process works?

During the first phase we take a history. In this phase we try to identify what the patient's current problems are that are causing the disturbance. Then we track it back to earlier unprocessed memories that are stored in the brain.

The brain has an information processing system that under normal circumstances processes disturbing events. Let's say you have an experience at work that upsets you. For instance, you get into an argument and your body reacts, you have negative emotions and critical mind chatter.
But then you walk away and you think about it, talk about it, dream about it; and after a while, it doesn't bother you any longer. Your brain makes the appropriate connections and you start to think, 'Oh, well I'm sure he was having a bad day,' or 'Well, we have had good times before, so why don't I just forget about it.' The important thing is that the brain ends up making the connections needed to process that event. The negative self talk and body reactions cease because the brain has made those associations.

But if you have a traumatic event as with PTSD, the experience and stress is so disturbing that the brain is unable to process the event appropriately. The experience then gets stored in the brain along with the emotions and the physical sensations and the beliefs that you had at the time.

So a lot of times what you will see in people with PTSD is that the person will have nightmares in the middle of the night as their brain is working to process these traumatic memories. But the memories are too disturbing, so they wake up afraid in the middle of the dream.  Veterans may still be ducking for cover twenty years after the war has ended because the brain has been unable to process the trauma.
Let's say there is a rape victim lying in bed with her loving husband and he touches her in a certain way.  Her body reacts and she becomes scared because that's the way the rapist touched her. Many kinds of experiences stored in the brain cause these types of negative responses. What we do in EMDR is identify what the memory is that is causing those reactions and we help the brain process them.

One thing to keep in mind is that even though we associate PTSD with war, and rape, and severe traumatic occurrences in a person's life, there is now research showing that general life experiences can cause even more symptoms than major traumas. So when people are chronically feeling anxiety and fear it's generally because of these unprocessed memories that have been stored.

Symptoms also include having a negative sense of self such as, I'm not good enough, I'm not safe, I'm not in control. These are the types of thoughts and feelings that people have and you can track them back to specific memories that are more or less running the show.

During the history-taking, we identify these memories that are the foundation for the problem. We identify the current situations are that are triggering the disturbance and then what kind of skills we need to provide the person for the future.

In the second phase -- "the preparation phase" -- we work on emotional state change techniques. So then, when we move into the reprocessing phases, they have complete control during the sessions. They are able to stop and go and put themselves into neutral and begin again throughout the entire processing session.

To access the memory for processing, the client brings up an image of the event, and the negative thoughts, and then notices the body sensations. Next, we add in a form of bilateral stimulation, which can be eye movement or taps or tones. Ten randomized trials have documented immediate decreases in negative emotions and the research indicates that this stimulation can link into the processes that actually occur during rapid eye movement sleep, which is when the brain processes disturbing information.

During these sets of eye movement the brain starts to make different connections. Then the therapist asks the client what came to mind, followed by standardized procedures that are used to work through the information.

You’re looking for changes in emotions, changes in imagery, changes in thoughts, and beliefs. All of this happens spontaneously as the information becomes incorporated and processed. The brain then keeps what it needs and what it doesn't need any more it lets go.

So very rapidly the patient can be better.  As I mentioned, research indicates that 84-100 percent of single trauma victims can lose the PTSD diagnosis after three sessions. A rape victim may start off saying, ‘It’s shameful, I should have done something.’  And at the end of the session she is saying, ‘Well it’s his shame, that’s something he is going to have to live with for the rest of his life. I’m a strong resilient woman.’ It’s quite wonderful to be able to see such healing in action. It involves not only an elimination of suffering, but the development of a healthy sense of self.

I’ve heard a lot of clinicians say that they felt burnt out before they had EMDR therapy as a tool for their patients. And once they had it they felt rejuvenated because they were able to see rapid change and help their most difficult clients.

Was there a specific moment that helped you decide that you wanted to become a psychologist?

Well I was planning to be an English professor, and I had finished up everything except my dissertation but then I was diagnosed with cancer. That then shifted my attention, because the whole field of psycho-immunology (the effect of stress on the immune system) was just starting to be developed. I wanted to find ways to help people deal with stress and to get that knowledge out to the general public. So I began an odyssey to discover what was available.
Eventually I entered a PhD program in psychology and one day I was going for a walk and I noticed the effect of the rapid eye movement on myself. At that time I had been using my own body and mind as a laboratory for some time and I was able to notice it, and that is when I started to develop EMDR.

Well nowadays I teach and write about EMDR mostly. I also help in designing research and suggesting new areas of application.  For instance the other research-supported trauma treatments use daily homework.  EMDR does not, so now some locations provide daily treatment for veterans. By means of this consecutive day treatment they can be finished within 1-2 weeks.

What kind of education would you suggest for students to be successful in this career field?

EMDR therapy is only taught to licensed mental health professionals, or students in a licensing track. So the first step would be to get your therapist license. The basic EMDR course takes about six days distributed over three months.  It’s important that the course you take be approved by the EMDR International Association (www.emdria.org).

What is your favorite thing about being a clinical psychologist?

Seeing people heal with EMDR therapy. It’s almost like watching it in time-lapse photography; it’s like a window into the brain. You can actually observe the brain making these connections.  It’s really fascinating. You see people come back to life regardless of the pain they have suffered. Be it abuse, humiliation, or trauma, their minds are able to process it and fix it during the therapy. You get to see them regain their health and walk into the future with confidence.

Could you describe any difficulties in your career that could help students prepare for their future as a clinical psychologist?

I think in psychology, prevailing paradigms don't change quickly. For instance it has taken years for EMDR to be accepted as a form of treatment for patients, Now 20 randomly controlled studies have proven its efficacy and it’s finally accepted around the world and it is helping millions of people. So if anything, it can be frustrating that change takes so long to occur.  But if you believe in something, help prove it to the world and don’t give up. Suffering people are depending upon us finding the best ways for them to heal.

What characteristics should perspective students have or acquire to be successful as a clinical psychologist?

Be willing to keep learning. Keep an open mind and learn procedures that work effectively and efficiently. They should also learn that they don't always have to be the expert. Many people become therapists feeling like they have all the answers and they are going to be the ones to tell the client what to do. With EMDR, it’s important to develop a healthy respect for the healing potential of people and to learn to be the facilitator of that healing.

For instance one patient said, ‘I feel like my therapist is the banister on the stairs that I climb.’ Make sure that you’re able to empower your client because that’s where the healing really takes place.

Do you see the field changing and what should we expect in the future?

I see there’s much more openness in different areas of psychology. We’re not counting on medications to handle everything. The stigma regarding mental health treatment is beginning to fade.

People go to a doctor immediately when they break their legs, but were often resistant when it came to emotional problems.  Through EMDR therapy we see that the brain is the physical basis for emotional problems as well. Society is starting to recognize that there is no shame in going to a therapist to fix these problems to start their healing.