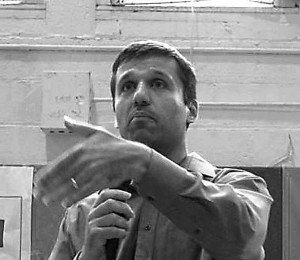 Since 2005, Dr. Lyubansky, has been a member of the teaching faculty in the Department of Psychology at the University of Illinois, Urbana-Champaign, where he teaches Psychology of Race and Ethnicity and Theories of Psychotherapy.

Dr. Lyubanksy’s research and writing interests include restorative justice and racial/ethnic group relations. He is a regular contributor to anthologies on popular culture, including Harry Potter, Buffy the Vampire Slayer, and Twilight and writes a blog for Psychology Today as well.

Was there a specific moment in your life that you feel led you to become a psychologist?

I don't remember a specific moment of discovery. I came to college with the intention of being a journalist but, probably somewhat typical of someone in an immigrant family, it did not actually occur to me to make sure that the university I wanted to attend actually offered a journalism degree.  I don't think I figured it out until mid-way through my first year and, by that point, starting over someplace else didn't seem appealing. But I took some psych classes and liked them and thought "this" might be a good way to spend my professional life.  I say "this" because that was pretty much my level of sophistication back then. I didn't really know what "this" was -- I basically had some fantasy of a psychotherapist but had never actually met one -- but I had the general idea that they "talked" for a living and that seemed appealing. I think in my fantasy I was trading writing for talking, and the talking seemed easier and just as fun.  Once I got to grad school, I discovered that I didn't want to be a therapist, but I still wanted to be a psychologist.

You have had a vested  interest in Race and Restorative Justice ,   can you describe these interests?  How did you find yourself so interested in these areas, was there a specific moment in time?

I became interested in race as an 18-year-old freshman.  This is actually a story I tell on the first day of the semester when I teach my Psychology of Race and Ethnicity course.

In the Fall of my freshman year of college, my friends and I are standing in line at the ticket counter, waiting to buy tickets for Spike Lee’s Do the Right Thing, which had just been released.  It’s a long line, and my attention focuses on the group of young Black men standing directly ahead of us.  They are boisterous and loud, seemingly oblivious to the rest of us waiting in line.  I watch them because they are in front of me and also because they are entertaining and I am enjoying their fun.  After a time, I notice that four or five are wearing identical T-shirts with the words “It’s a Black thing, you wouldn’t understand” printed on the back.  When the words register, I am flooded with anger at the perceived injustice. I want to go up to them and say “How dare you make assumptions about me?  How do you know I wouldn’t understand? Why don’t you try explaining it to me first?”  But I don’t have the courage, so I just stand in place, watching them, seething. Once inside the theater, the film absorbs all of my focus. Walking out, I feel badly for Sal and his family, as well as for Radio Raheem and think that, no, of course Mookie didn’t do the right thing.  But as I walk out, I notice that the African American audience seems agitated.  I don't know how it's possible given that we just watched the same film, but they seem to have a different take on what happened than I do.

Did they think starting a riot was the right thing to do?  How could they?  How could anyone?  I feel angry at their anger.  They have no right to think that way.

This experience stayed with me for a long time. That day I realized there was something complicated about race that I didn't understand, and it somehow seemed really important to me that I understand it better. There were no psychology courses about race back then, at least not at Penn, and I wasn't even aware of related disciplines like sociology, so I had to wait until graduate school to really start learning. Almost 20 years later, I'm still continuing my learning.

My interest in restorative justice is more recent, just dating back to 2009.  I was, as it happened, planning to write a community racial healing grant, and was looking for a community program or intervention around which to center the proposal.  Several different people independently mentioned the work of Dominic Barter in Brazil, so, a bit on a whim, I decided to travel to Oakland to check him out.  He was there to do a 5-day learning event.  I really didn't know what to expect -- I barely even knew about restorative justice back then -- and wasn't even sure I'd want to stay the entire 5 days, but 15 minutes into the first day, I knew that this work would become an important part of my life.

How would you describe Race and Restorative Justice to someone who wouldn't know the first thing about what that means?

Well, first of all, these are two independent concepts. It's hard to define either in just a few words, but I'll give it a try.

Race is a socially constructed, politically motivated method of categorizing people into distinct social categories on the basis of genetically determined phenotypical characteristics (i.e., appearance).  In the U.S., despite the so-called "post-racial" era ushered in by the election of Barack Obama, the racial classification system (and the corresponding racial hierarchy) continue to have a substantial impact on the education system, the health system, the justice system, and every other social system in the country.

Restorative Justice is a 30-40-year international movement consisting of a variety of different restorative practices from all over the world, many of which have indigenous roots.  While the specifics vary from practice to practice, at the heart of it, restorative practices provide an alternative (or additional) approach to the punitive systems that currently dominate most Western mainstream societies' approach to crime and conflict. Rather than focusing on assigning blame and administering punishment, restorative practices attempt to identify the harm done, bring together the parties involved and impacted by what happened for the purpose of mutual understanding and working together to fix the harm and, if necessary, restore the relationships.

Could you give us a brief synopsis of your personal career as a clinical psychologist?

I'm an academic clinical psychologist.  This means that my job is to teach and produce scholarship rather than to be a practicing psychotherapist. After receiving my Ph.D. in 2000, I worked for four years as a faculty member in a small liberal arts college before coming to the psychology department at the University of Illinois. My current position is a bit unusual in that I'm not in a tenure line.  This means that I teach more than most of my colleagues but don't have the expectation (and pressure) to produce research.

Can you describe an average day of work in the field of Clinical Psychology, kind of your 9-5 schedule?

My days vary.  I have days I spend 4 hours in the classroom and the rest of the day either preparing for class or meeting with students.  Other days I have some time to write and/or do restorative justice work in the community.  My work day typically starts after I drop my kids off at school.  Some days I end at 3pm. Other days I work until 5pm.  I usually wind up working several evenings a week as well, usually grading or writing.

If someone wanted to become a successful clinical psychologist, what in your opinion would be the optimal educational pathway?

There is no one optimal pathway.  Clinical psychology is a very broad field and everyone needs to customize their educational journey based on their interests and strengths. And also, despite the stories you might hear (on this website included), career paths are rarely linear.  Most of us will have false starts, twists and turns, and even dead ends.  If we're open to the possibilities, we find out along the way that we are interested in things we never knew were interesting and find opportunities in the unlikeliness places.  To the degree that there is some optimal formula, it is openness + curiosity + perseverance = success.  A willingness to be creative and depart from convention helps too.

What have been some of your favorite things about your job as a Psychologist?

The best thing is meeting interesting people. As just one example, a few weeks ago, my family visited an intentional educational community that lives without electricity and petroleum and whose members go on annual superhero bike-rides in which they dress up as their own unique superhero and, as a group, bike across the urban or rural terrain looking for superhero (i.e., helpful) things to do.

Could you describe anything about your job that has been difficult or a hardship for you, Something that students should be prepared for when entering this career field ?

My weekly schedule is relatively unstructured apart from my classes, which means I have to create my own structure and flow. This has many benefits, but it's also challenging sometimes to work efficiently and I, like many, struggle with taking on too many projects, which means there are periods when I have much less downtime and time with my family than I enjoy.  I think the main challenge is finding and then protecting the right balance between work and family. I'm definitely still working on this.

With the wisdom you have acquired over the years as a psychologist, what kind of advice could you offer students that you wish you would have known when you started your career path?

I hesitate to offer advice.  I believe every student has to find his/her own way, but I'll give it a go. Here are my three pieces of wisdom:

1.  The beauty is in the journey, not the outcome.  Try to enjoy each step of the way. And look for the opportunities. A dead end in one direction is just an opportunity to head in another.

3.  When conflict happens along the way, and it will happen.  Remember, the safest and best thing you can do is to walk towards it with the purpose of understanding.

If you would like to know more about Dr. Mikhail Lyubansky you can follow him on Twitter @MikhaiLL and Facebook. Also feel free to check out his blog at Psychology Today.    For additional information on clinical psychology careers visit our page on Becoming A Clinical Psychologist in our career section.