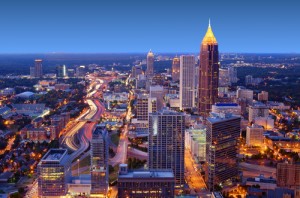 Georgia is one of the 10 most populous states in the entire country, so it should surprise exactly nobody that the Peach State offers a veritable wealth of post-secondary education opportunities to interested students, including those students interested in psychology. In addition to having more than 500,000 graduate and undergraduate students enrolled in Georgia institutions as of the 2014 school year, the state was also home to more than 130 degree-granting institutions, far more than the national average of 90. Those interested in psychology will also be happy to know that Georgia is also one of the most prolific states in the country when it comes to producing psychology degree recipients. According to data from the University System of Georgia, the state universities granted almost 3,000 degrees -- both graduate and undergraduate -- in psychology and that number doesn't even include private institutions in the state.

The psychology degree options in Georgia are basically the same options offered at institutions in any other state across the country. Everything from an associate’s degree to a doctoral degree in psychology is available to students who are interested, and there is a number of specialty psychology degrees offered by universities across the state as well.

The associate’s degree requires the least amount of time and effort as it will only take two years to complete, but it’s not a particularly popular degree because employers within the psychology industry usually require a far more comprehensive education in order to qualify for the job. Unfortunately, a bachelor’s degree will take twice as long to compete but will only marginally improve your chances of landing a job in the field of psychology. In 2008, the American Psychological Association found that only 5 percent of graduates with bachelor’s degrees in psychology were working in the field of psychology and the majority of that five percent is working in education, research, or as a psychologist assistant.

Psychologist licensure requirements in Georgia are taken very seriously as the state puts these licensed psychologists in positions to support and watch over people with a myriad of emotional, mental, and physical issues. In order to even be considered for licensure in the state, applicants need to have been conferred with a doctoral or professional degree and have completed extensive on-the-job training before their candidacy will be taken seriously. These demanding requirements are likely why the American Psychological Association estimates that 25 percent of students who earn a bachelor’s degree in psychology go on to study psychology at the graduate level with four to six percent entering a doctorate program and 20 to 22 percent entering a master’s degree program. These students realize that a bachelor’s degree won’t open even half the doors that a doctoral degree will open, and so they opt for additional schooling.

Georgia has a number of big cities in terms of population and land mass, but one city – Atlanta – is more recognizable and popular than the rest of the cities combined. That said, there are plenty of other good schools spread throughout the state that offer psychology degree programs and degree programs in related subjects. Amazingly enough, out of the 43 colleges and universities in Georgia that offer psychology degrees, only two schools outside of Atlanta – The University of Georgia, and Georgia Southern University – offer doctoral degrees in the subject. Other state schools with a wealth of offerings include Savannah State University, Augusta State University, and Valdosta State University. All three of those schools offer graduate degrees in psychology and psychology-related subjects. If you are looking for a smaller school, consider institutions such as Covenant College, Emmanuel College, Georgia Gwinnet College, and Life University, all of which offer a multitude of psychology degree programs.

Atlanta is also a bustling city with a growing economy and workforce, and psychology is no exception. Atlanta actually runs away with the state crown for city with the largest population of psychology professionals. According to the United States Bureau of Labor Statistics, there were at least 1,600 psychologists employed in the Atlanta metropolitan area as of May 2014. The annual mean salary for these psychology professionals was between $74,730 and $84,610 depending on the specialty of the psychologist.

There are also many online psychology degree options offered by schools that are open to anyone in the nation, such as Post University Online and Grand Canyon University. Also popular are Walden University, Capella University, and DeVry University. Many of these schools offer both undergraduate and graduate degrees in psychology that can be obtained online. These are not the only schools that are available, and it would be beneficial to consider all of your options if you are looking to obtain an online psychology degree.

Career Opportunities for Psychologists in Georgia

According to the Bureau of Labor Services, as of May 2014, there were at least 2,550 professional psychologists employed throughout the state of Georgia, making it one of the most popular states for psychology professionals in the country. The news gets better for aspiring psychologists thinking about applying for licensure in Georgia, as those psychologists earned an annual mean salary of between $72,470 and $81,960 -- great salaries for anyone in any profession.

It should also be worth noting that Georgia is in the top half of states when it comes to average job growth for clinical, school, or counseling psychologists. For clinical, school, and counseling psychologists, there is 22 percent of growth expected throughout the United States, and 19.5 percent of growth expected in Georgia between 2010-2020. That 19.5 percent equates to roughly 500 new professional psychologists in the state, making the Peach State one of the more intriguing options for students considering a career in psychology.